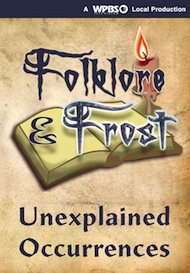 Join WPBS-DT on a tour of some of Jefferson County’s historic sights where “unexplained occurrences” are a part of everyday life.

Weﾒll visit the Jefferson County Historical Society, where it is said that Mrs. Paddock still protects her beloved home.

Weﾒll stop by the Burrville Cider Mill and learn aboutCaptain Burr, who has been rumored to have stolen from ships on Lake Ontario and sold the goods to the troops in Sackets Harbor.

Guests of the John Hoover Inn in Evans Mills, NY have been known to hear Victorian-style music long after the Inn is closed and the patrons have gone
home for the night.

The Sackets Harbor Battlefield became the center ofAmerican naval and military activity for the upperSt. Lawrence Valley and Lake Ontario following the out break of war between the United States and
Great Britain in 1812. Recordings made at the battlefield have been reported to reveal muskets and cannon fire.

Built in the early 1800’s as a hotel for travelers and sailors on the St. Lawrence, OﾒBriens exchanged hands a number of times before becoming a
dedicated pub.