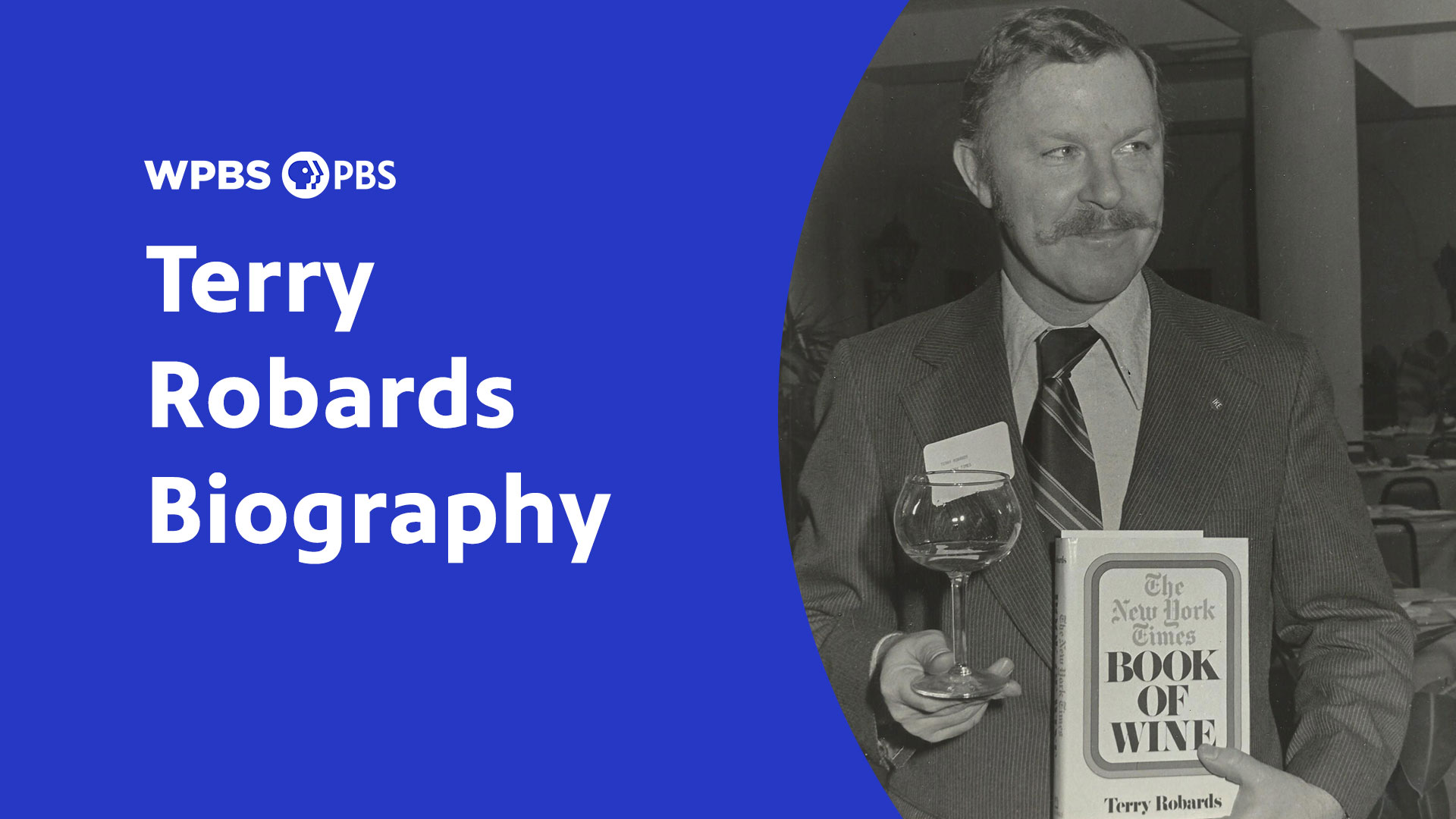 Terry Robards first became interested in wine during  the early 1960s when cocktail parties were all the rage.  His aim was to find a pleasant drink with less alcohol content than distilled spirits.   He started simple;  tasting and comparing Beaujolais wines while studying the books of  French pioneer wine writers Andre’ Simon and Alexis Lichine.

Eventually, Terry tasted his way through the important wines of the world with books in hand.  At the time he was working as a journalist for the NY Herald Tribune, then when the Herald Tribune folded in 1966, he did a stint with  Fortune Magazine as a monthly columnist.  However, Robards realized he missed the action associated with daily reporting,  so in 1967 he joined the staff of the NY Times as a financial reporter.  He also wrote the occasional wine article for the Times Magazine, as well as the Wednesday Ladies Section of the paper.

In the early 1970s, Robards hit  NYC air waves with a nightly five minute radio program on WQXR – it was called  The Topic Is Wine.   Then, around 1972,  Terry came up with the idea of writing the NY Times Book of Wine – a  sort of companion book to Craig Claiborne’s  NY Times Cook Book.  Quadrangle Book Publishers loved the idea and they offered him a publishing contract.

In 1973, Terry packed his family up and they moved to London where he worked as a Foreign Correspondent.  While there he was able to spend time doing research throughout the vineyards and  wineries of Europe.  He gained first hand knowledge that proved to be the foundation of his book, and he made life-long friends in the wine industries of France, Italy and Germany.

Upon returning to the United States in 1975, Terry resumed his work at the NY Times financial desk.  While abroad, the Times had begun a wine column with writer Frank Prial as the columnist.  But, after the NY Times Book of Wine was published in 1976, the paper realized their most well known wine writer was Terry Robards.  Eventually,  Frank Prial was transferred to the  Paris bureau and Terry took over as wine critic, drawing on his personal experience in European wine country to educate his followers.

In 1983,  Terry Robards left the NY Times and joined the NY Post, which gave him a carte blanch expense account to travel.  He was also able to freelance for publications such as Bon Appetit, Wine Spectator and more.  In 1984, Terry’s second major work was published;  Terry Robards’ New Book of Wine: The Ultimate Guide to Wines of the World.

With journalistic success well established, Terry Robards decided to move from Bronxville, NY to Lake Placid, an Adirondack Mountain tourist town famous for hosting the 1932 and 1980 Winter Olympics.   It was there that he opened Terry Robards Wines and Spirits on Main Street,  in the summer of 1988.  After the new business was established, he resumed travel and freelance writing as well as publishing his own news letter – The Robards Report & Wine Traveler.

In 1994, Robards was offered the position of  Senior Managing Editor and Columnist for Wine Enthusiast magazine.  It was a challenge he couldn’t resist so he took the job and relocated to Bronxville, NY for four days a week and back to Lake Placid to work in his shop over the weekends.

In 2004,  Terry met his wife Julie, a journalist and author with a speciality in antiques. The following year they exchanged vows in the 14th century wine cellar of Remossenet Pere et Fils in Beaune, Burgundy.   While there they attended a chapitres  with close friends at Clos de Vougeot – home of the famous Burgundian Wine Society – Confrerie des Chevaliers du Tastevin.   In 2007, Julie was inducted into the Chevalier du Tastevin Albany Chapter  and  Terry was given the title of Grand Officier Honorarie, as the longest standing member in the United States.

Over the years Terry Robards has served as a judge for the Concours de Mondial International Wine Competition.  He is a founding member of L’ordine Della Vita Italian Wine Society and a member of numerous organizations including the Commanderie de Bordeaux, Compagnons de Beaujolais and the Food and Wine Society of New York to name a few.

In 2011, Terry’s step son Timothy Robinson ( a professional bartender) took over day to day operations at the store.  His  knowledge of distilled spirits, and his enthusiasm for educational seminars and tastings on the subject,  have served to balance out the wine focus of the store.

Furthermore Tim’s social media skills and marketing expertise have helped to grow the business into what it is today.  Terry Robards Wines and Spirits offers the very best selection of fine wine and rare spirits north of New York City.

In 2012, Terry Robard was inducted into the Wine Media Guild Wine Writer’s Hall of Fame.  Shortly thereafter he officially retired from day to day operations at the wine store, but still continues to be involved in educational wine tasting events.

In 2014, Julie Robards began an educational wine program called  The Basics of Wine.   The ten week certificate course covers everything from the history of wine-making techniques to tasting and learning about the most popular wines of today.

Terry Robards Wines and Spirits, now in its 33rd year of operation, can be found at www.trwslpny.com and is also on facebook and instagram.  The store is located at  2047 Saranac Avenue, Lake Placid, NY.