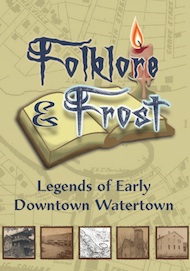 Explore early downtown Watertown and some of its eerie history, brought to life on this half-hour DVD! Historical period approximates early 1800’s – 1930’s.

The Paddock Mansion: Olive Paddock’s pride and joy. She donated the house to the Jefferson County Historical Society upon her death in 1922. Some say she still keeps a caring eye upon the house.

The Paddock Arcade: Built by Loveland Paddock in 1850 following the Great Fire of 1849. It is the oldest operating mall in the United States.

Public Square and the Great Fire of 1849: The fire destroyed nearly 100 buildings. Practically the whole business section of the city had been wiped out. Among the losses were two of the city’s hotels, three banks, the post office, over 30 stores, and the old Trinity Church on Court Street.

Court Street Lot: Learn the tragic story of Mr. and Mrs. Whittlesey, who let their greed get the better of them.

Liberty Mall: Discover the site of the first village graveyard, and what happened to it. Have all the bodies been removed or are some still at rest – perhaps underneath the parking lot?

County’s First Courthouse and Jail: Located in the triangle formed by Court, Massey, and Coffeen Streets. Learn the fate of axe murderer Henry Evans, sentenced to “hang by the neck until dead.”

Disclaimer: Details documented in this film are based on actual accounts recorded in history. Reenactments are an interpretation of events and may or may not accurately reflect the actual occurrence.

Purchase This Program at our WPBS-DT eCommerce Store